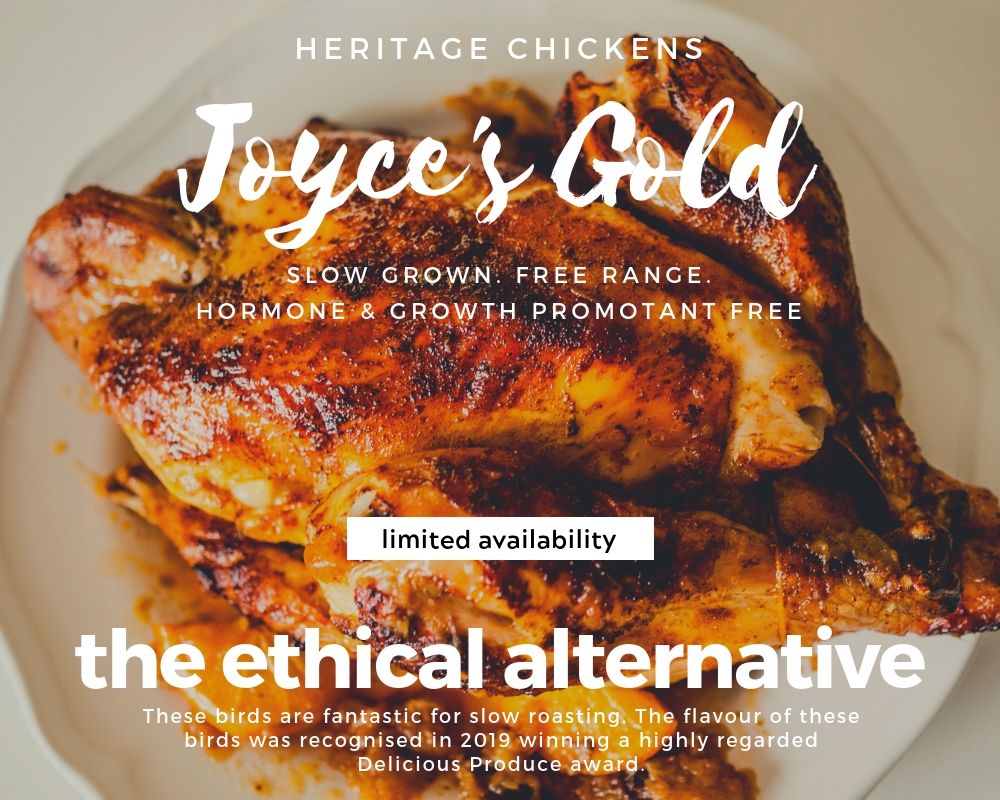 The Joyce’s Gold Heritage Chicken is a breed developed in Australia by long time poultry farmers, the Joyce family.

Their pastured, slow growing, heritage breed chooks were developed using traditional heritage breeds specifically suited to true FREE RANGE conditions and Australia’s often extreme climate. They are quite happy in the hot or cold, sleeping on the ground, on perches or even in trees.

The Joyces raise their birds naturally on pasture. They take 12-16 weeks to reach maturity, unlike most meat chickens that can only grow out until 5-6 weeks. The Joyce’s Gold Heritage Chicken develops all parts of their body at the same rate allowing for natural chicken movement and behaviour. With this more natural growing period and true free ranging ability, you get a table bird that tastes like chicken used to taste. Customers often say they have not had birds with this amount of flavour in many years if ever before. Some say they’ve only tasted birds like this in Europe and Asia.

Regular commercial meat chicks become very big in the breast area at an amazing rate and their legs truly struggle to support their own weight. This means even the lucky ones on free range spend most of their time sitting and usually only getting up to eat mash or have a drink.

WHERE ARE THEY FARMED?

The Joyce’s raise their Joyce’s Gold Heritage Chicken on their farm in Richlands, Brisbane. They also supply their chickens to a handful of selected farms in NSW & VIC. All Joyce’s Gold farmers raise their birds naturally on pasture.

The birds are raised in small numbers and are able to use their natural foraging instincts under this system. The birds are not fed any growth promoters or artificial hormones.

The birds are kept safe from predators, nice and warm in brooders until around 4 weeks and then placed outside to enjoy the outdoor conditions where they dust bath, eat insects and are allowed to be chickens. The Joyce’s Gold Heritage birds are then raised this way until 12-18 weeks to develop real chicken flavour.

WHO ARE THE JOYCE’S

The Joyce family has been involved with poultry farming since 1945.  Bill and Jean Joyce decided to leave the city and Bill’s job as a butcher behind and try their hand at poultry farming soon after the second world war.  After successfully running farms at Aspley and Moggill they purchased our Richlands farm in 1952.

The farm was primarily a layer farm and Bill was told in the early sixties that unless he changed from a barn and free range system to cages he would go broke.  He hated cages and stayed with the old ways until his retirement.

It was also during the sixties that a small abattoir was approved as in those days there was a good market for selling dressed spent layer hens .

Ducks and turkeys were also processed and it is one of my first memories helping out in the abattoir as a youngster and in winter having a nice warm bowl of giblet broth for lunch. Bill always preferred the Heritage breeds of poultry and usually stocked purebred Australorp utilities. He had a background with these and attended Gatton Agricultural College where they won the world egg laying competition.

As a youngster I loved reading Dad’s old books on traditional poultry farming methods and heritage breeds. We sold the dressed poultry at the door and loved listening to Dad talk to European and Asian customers about how they loved the flavour of our birds and things like the yellow skin and good fats.

Dad and I always played around with a few heritage table bird crosses over the years and knew what a superior flavour they had compared to modern, fast growing meat chickens. With this background we decided back in 2010 to develop a slow growing, heritage breed bird full of flavour, like they have in Europe. Several years later, we’re now happy to share our Joyce’s Gold Heritage Chicken with the world.

Sign up to our E-NEWS to stay up to date with all things Meat at Billy`s - new products, competitions, recipes, events etc. Every 3 months we give away a $150 meat tray* to one lucky subscriber! (*Prize is pick up only.)

Thanks, you are now signed up! Keep an eye out for your meaty emails!

We won`t pass your details on to anyone else. WE HATE SPAM TOO - both the email & the canned versions :-)!